Employment at Will Laws by State
Compliance

Unlike most nations, the US labor law heavily favors employers. Employment is generally ‘at will’, and can therefore be terminated at any time. There is usually no burden on employers to prove “just cause”—they simply have to avoid discriminatory or illegal action. However, many states do apply important exemptions.

To visualize these difference, we’ve created a map detailing at-will employment laws across the US. 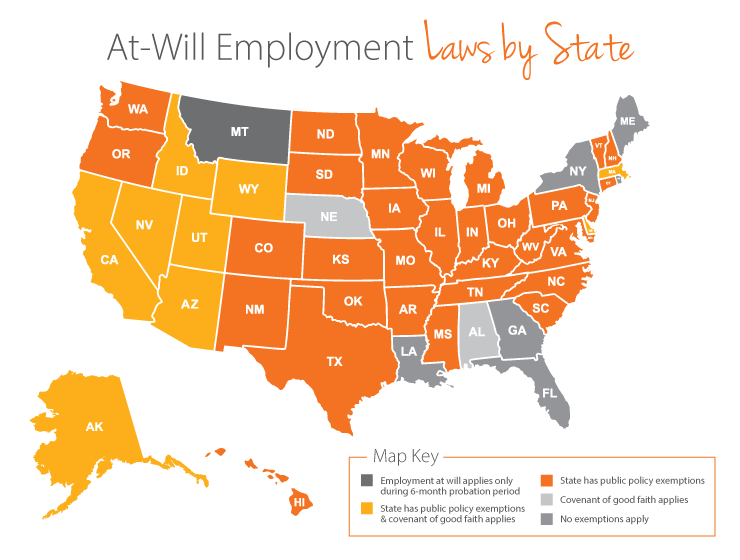 Here are at-will employment rules by state broken down in a helpful table.

* Employment at will only applies during 6-month probation period.

Now let’s explain what that means for businesses…

What is Employment at Will?

Employment at will is the principle that an employer can terminate employment for any reason, provided that is not illegal. All states have some form of employment at will although mostly with some restrictions—notably Montana, in line with European nations, only allows this during an initial 6-month probation period.

What are the Advantages of Employment at Will?

In theory, at-will employment offers freedom and flexibility to both employers and employees. It gives employers the financial security that they are able to reduce labor costs fast. It also means that employees can choose to leave a job they dislike without having to work any notice period. However, critics claim that at-will employment leads to job insecurity, disadvantaging workers.

Exemptions to Employment at Will

While the exemptions listed above apply only in certain states, there are other circumstances in which employment at will doesn’t apply:

Running a business, you know that compliance isn’t just about being compliant—you also need to prove it. You never know when the IRS, the DOL or the EEOC will demand to see your paperwork, which is why it’s so important to retain payroll records. To make things more complicated, each agency has its own rules for which documents you have to keep and for how long. The good news is, you don’t have to buy more filing cabinets. HR software can automatically store everything you need, with the added benefit of simplifying the whole payroll process. Why You Need to Retain Payroll Records At a federal level, you’re keeping payroll records primarily for three agencies: The IRS The Department of Labor (Wage and Hour Division) The EEOC These...
Read Now
Watch time: 63 mins

This session is eligible for 1 HRCI and 1 SHRM credit.2021 has arrived. Have you trained your employees on anti-harassment requirements?Join our webinar for the latest updates on new and pending anti-harassment legislation and learn best practices for meeting (and exceeding) the mandates within your organization.Topics included are: - New training and policy requirements - Pending legislation - Key deadlines and effective dates for 2021 - How you can meet the mandates in 2021 Speaker: Jill AlbrechtJill Albrecht is a labor and employment law attorney, as well as a compliance subject matter expert. She is also a former shareholder at Littler, the world’s largest labor and employment law firm. Jill regularly conducts anti-harassment and...
Register Now